Blackburn Law Association Raises £1,400 With The Help of Farleys 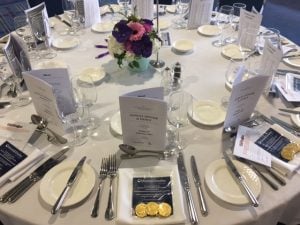 On Friday the 3rd of February, the British Incorporated Law Association (BiLA) hosted its annual dinner with the help of some of the Farleys team. The wonderful event was held at Northcote at the Rovers in Blackburn and brought together around 170 legal professionals from across the region. A delicious dinner and live band were enjoyed by all who attended and gave the opportunity for everyone to meet old friends and reflect on the past year.

Along with the music and fun, the main aim of the night was to raise as much money for the BiLA’s chosen charity as possible. Blackburn Youth Zone (BYZ) was the chosen charity.  The Blackburn Youth Zone opened in the heart of Blackburn in 2012 as a not-for-profit organisation providing a “21st century youth hub” which is “open to young people aged 8 to 18 years old, aiming to change the prospects offered to young people in the area.”

Following the final count by the BiLA , we are extremely pleased to announce that the BiLA Annual Dinner 2017 raised more that £1,400.

“It is fantastic that we have managed to raise so much money for such a worthwhile cause. We know that without charitable donations such as these, the Blackburn Youth Zone will struggle to remain open and providing such an excellent hub for young people in our area.

The BiLA dinner was such a success, all involved are already looking forward to the next one!”

“We were delighted to be nominated as the beneficiary charity of the BiLA Annual Dinner and were overwhelmed by the level of support from everyone who attended.

This most generous donation will go towards providing thousands of local young people with somewhere to go, something to do and someone to talk to everyday for just 50p per visit.

Thank you again on behalf of all the team at Blackburn Youth Zone.”

If you’re interested in fundraising or lending a hand at the Blackburn Youth Zone, please contact them here.

Throughout the year, Farleys Solicitors lend a hand to local charities by hosting and helping out at events across Lancashire and Greater Manchester. If you would like to keep up to date with any future events, please join our mailing list.