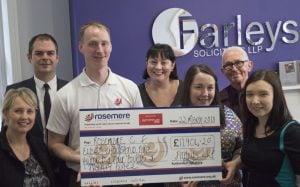 Staff at Farleys are celebrating raising thousands of pounds for Rosemere Cancer Foundation.

Farleys had pledged to raise £10,000 for the charity’s 20 Years Anniversary Appeal but after ended up smashing this total by almost £2,000. They did it with a year-long fundraising drive that included a fashion show, a race night, and a will writing scheme plus the promise that staff members taking on any individual sponsored challenges would also turn out for Rosemere Cancer Foundation.

Antonia Love, partner at Farleys, said: “As a firm, Farleys has been a proud Rosemere supporter since 2006. Between then and 2017, we raised more than £13,000 for the charity but decided to up our efforts in support of Rosemere’s 20 Years Anniversary Appeal. We set ourselves what we thought was a very ambitious target but are delighted to have exceeded it.

“On behalf of Farleys, I would like to thank all staff, clients and business associates for getting behind us to achieve this wonderful total.”

Cathy Skidmore, Rosemere Cancer Foundation’s trust and corporate fundraising manager, said: “We are immensely grateful to Farleys and everyone connected with the company for this terrific donation to our 20 Years Anniversary Appeal, which for some patients will revolutionise treatment.”

It has already brought the most advanced robotic surgical system on the market to the centre, the Da Vinci xi, making it the first in whole of the North of England and only one of three centres in the entire country to have such a piece of keyhole surgery kit. It has also enabled the appointment of a cancer clinical trials to co-ordinator to help better link Rosemere Cancer Centre with the worldwide quest to find new and improved treatments to combat cancer, while plans are being drawn up to refurbish the centre’s in-patient ward. For further information on the appeal, Rosemere Cancer Foundation’s work to bring world class cancer treatments and services to local cancer patients and to make a donation, visit www.rosemere.org.uk

Farleys’ Race Night is a Tote-al Success for Rosemere

Farleys Partner with Rosemere for Make a Will Week

Farleys Solicitors are pleased to announce a ‘Make a Will Week’, in conjunction with Rosemere Cancer Foundation, which works to bring wo...