This week, the family of a teenage girl who tragically took her own life after viewing material about suicide and self-harm on social media have been refused legal aid funding at her inquest.

Molly Russell was just 14 when she died in 2017. Her parents in part blame the content Molly was able to see on Instagram and, after the revelations about her death, Facebook, who owns Instagram, was forced to change its policies and promised to remove all graphic content about suicide and self-harm.

The Legal Aid Agency refused funding which would have enabled the family to access legal advice and representation at the inquest. Currently funding is not automatically granted at inquests except in “exceptional circumstances”. In their letter to the family, they said that Molly’s case will not “lead to significant and material benefits to a large cohort of specific persons”. Molly’s father said he was “quite flabbergasted” by the decision and said “it’s quite shocking to think that our legal aid agency, our society, doesn’t think it’s important to support such cases”.

The family will now be left in the unimaginable position whereby they either have to raise significant funds to pay for a legal team or will have to appear in the coroner’s court to represent their daughter’s interests by themselves. It is anticipated, and is certainly common practice, that the big technology companies, who may well become interested persons in the inquest, will send representatives to the inquest. The Coroner had already written to Facebook, Pinterest, Youtube and Apple requesting all relevant information.

We wrote about this in February, following the long awaited report on legal aid for bereaved families published by the government. The Ministry of Justice had committed to carrying out a review for changes to the current availability of legal aid for bereaved families. This was in response to widespread calls to address the current inequality of arms, including those from the Chief Coroner and the Right Rev James Jones who reviewed the experience for the Hillsborough families.

Part of the review included families explaining the impact which the often traumatic process of means testing for legal aid had on them during an already difficult and distressing time that no family ever imagines having to experience. Families are forced to jump through multiple hoops and answer extensive personal questions during the process of applying for legal aid. On the other hand, state bodies have automatic access to taxpayer’s money for expert legal teams.

When the review arrived it came as a blow to many of the families and campaigners involved as the report rejected the calls for the provision of non-means tested legal aid and made only limited commitments to changing the current system.

INQUEST, an organisation committed to providing expertise on state related deaths, launched a fresh campaign in Parliament entitled “Now or never! Legal Aid for Inquests” which calls on the government to introduce automatic non-means tested legal aid funding to families following a state-related death and for funding equivalent to that enjoyed by state bodies/public authorities and corporate bodies represented. Commenting on the report, Deborah Coles, Director of INQUEST, said: “The Ministry of Justice has failed to confront the reality of the uneven playing field faced by bereaved families. … This is a dishonest response and a betrayal of those who invested in this review in the hope of securing meaningful change.”

Justice for Laughing Boy is another powerful campaign set up by Sara Ryan who’s son, Connor Sparrowhawk, was admitted to an inpatient unit ran by Southern Health NHS Foundation Trust and drowned in the bath on 4 July 2013. During the inquest, Sara was reliant on the support from INQUEST and help from two individuals giving help pro bono, whilst the NHS employed seven Queen’s Counsel barristers to defend themselves, with their legal fees, reaching over £300,000, being paid for by the tax payers.

The following image illustrates very clearly the shocking reality of the uphill battle which Sara, and many bereaved families like Molly Russell’s family, face: 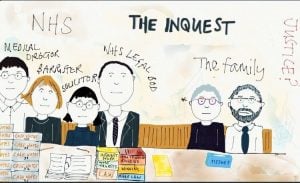 To speak with an inquest specialist for legal advice on inquests and funding for inquests please get in touch with Farleys Solicitors on 0845 287 0939 or submit your enquiry online.

Farleys Partner Jonathan Bridge spoke on Granada News this week after the Ministry of Justice confirmed that it will not introduce automatic...

Call for Automatic Legal Aid Rejected by Ministry of Justice

A widespread call for automatic legal aid following state-related deaths has been rejected by the Ministry of Justice For decades the chari...

Campaigners are arguing for emergency legal aid to be provided for bereaved relatives at inquests for those who die in custody, including po...