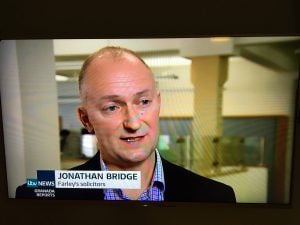 Farleys Partner Jonathan Bridge spoke on Granada News this week after the Ministry of Justice confirmed that it will not introduce automatic Public Funding for Inquests where the State is represented.

Farleys Inquest Department represent many families who are affected by this. Mzee Mohammed died in 2016 after being detained by security staff and Merseyside Police at Liverpool One. His family also appeared on Granada Reports to talk about the devastating effect it would have upon them if they were unable to have legal representation at Mzee’s Inquest. There are potentially five different State organisations represented at the Inquest including health authorities, the Police, the City Council and the Ambulance Service. All have access to the best legal representation funded by the State. At present, as Legal Aid is not automatically available to the bereaved family, they may be left with no representation during a complex and lengthy investigation into the circumstances surrounding the death of their loved one.

The Inquest Charity is running a high profile campaign on behalf of the families of victims. They want a level playing field. Farleys fully support their petition such that means testing be removed when assessing eligibility for Legal Aid in these cases. Families should have the same level of representation as the other interested parties at the Inquest and as such Legal Aid should cover the appropriate level of Barrister and solicitor to deal with the case. Where necessary the family should receive financial support to help them attend the Inquest.

These are all important issues which need to be addressed so that Mzee’s family and others like them have the representation they need during the traumatic process as the death of their loved one is investigated.

“It cannot be right that the family of the deceased are unrepresented while the State bodies that potentially caused the death have the best possible legal representation funded by the State.”

The full interview with Granada News can be viewed here.

Call for Automatic Legal Aid Rejected by Ministry of Justice

A widespread call for automatic legal aid following state-related deaths has been rejected by the Ministry of Justice For decades the chari...

Campaigners are arguing for emergency legal aid to be provided for bereaved relatives at inquests for those who die in custody, including po...

Mzee Mohammed, aged 18, died on the evening of 13th July 2016 after being detained by security staff and Merseyside Police at the Liverpool ...