Why are victims of rape unwilling to report crime?

Home » Blog » Why are victims of rape unwilling to report crime?

I was approached by the BBC World Service this month to speak on their radio programme World Have Your Say regarding the subject of why victims do not report rape. Two days later the BBC approached me again and I was asked to contribute to a live television programme on the emotive and topical subject.

Following the world wide and powerful hashtag #Beenrapedneverreported, the programme heard from rape victims on their experiences of different criminal systems and why they felt unable to report the crimes against them. I was asked to provide a prospective with regard to the criminal system in England and Wales on what a victim can expect from an investigation and proceedings and why victims are often unwilling to report such crimes.

Over recent years there have been reports that victims of rape have been unwilling to report the crime due to a lack of confidence in the legal system. However statistics recently published suggest that the confidence is growing and not just with regard to historic cases but there has also been a rise in reported “new” allegations. I have been unable to ascertain the reasoning for the rise. Such reasoning could include beliefs that greater protection is now afforded to victims, or feelings generated through the press and social media that such crimes should be reported and a greater acceptance to do so or perhaps the increased number of high profile cases that have given victims the confidence in the legal system.

So what can a victim expect when they report a crime? The term presumed innocent until proven guilty was introduced by William Garrow, an eighteenth century barrister and later Attorney General for England and Wales. This legal principal places the onus on the prosecution to determine a person’s guilt and requires any allegation to be tested in court. Such testing of the evidence will undoubtedly require cross examination of the witness i.e. questioning by the accused’s lawyer. For such determination to be made the best evidence possible must be considered.

To enable such best evidence there are special measures that can be sought on behalf of the victim to ease fears over giving evidence which can include giving evidence behind a screen so that the victim cannot see the accused or the evidence given by way of a live link thus avoiding the need for the victim to give evidence in court. I also detailed during the programme the discretion of the Judge to consider the limits to be applied on respect of cross examination of the victims sexual history. There is of course additionally support through the Police, Crown Prosecution Service and various charities.

Testing of the evidence is of course crucial since as with any reported crime sadly there are false and malicious allegations made which not only causes considerable suffering and distress to those accused but also detracts from genuine victims.

For further information please don’t hesitate to contact Farleys solicitors. Our experienced team of professionals are available to offer you the guidance and support you need, please call 0845 050 1958 or alternatively you can email us. 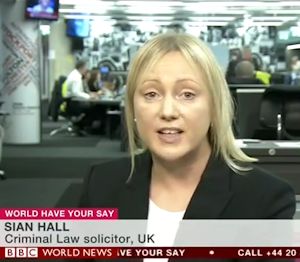