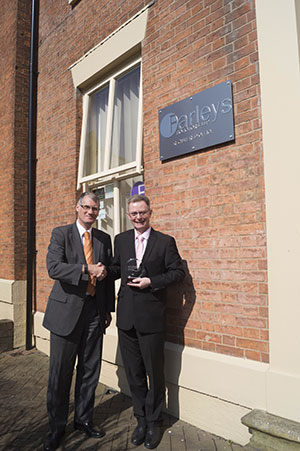 A Lancashire family lawyer from Farleys Solicitors has been awarded Resolution’s John Cornwell Award for his contribution to family law, after nearly 30 years of providing unstinting support to families across Lancashire.

Barry Bunyan, associate partner at Farleys Solicitors in Blackburn was awarded the prize as part of Resolution’s National Conference on 31 March in Birmingham, in recognition of his contribution to the family law profession.

The John Cornwell award was set up in 2013, to recognise the ‘unsung heroes’ who go the extra mile to promote Resolution’s Code of Practice and the organisation’s core values of a non-confrontational approach.

Speaking after the awards, Barry said: “I am very humbled to receive this recognition. To adopt a cliché: I was just doing my job.

“I could not imagine practising family law in any way other than the Resolution way and to be recognised for that makes me immensely proud. Once again I wish to thank all those who took the time in their busy lives to nominate me and to the judging panel for selecting me.

“Most of all I thank John Cornwell and the founders of Resolution for bringing the Code together, which afforded the opportunity to help families in a better way at a most difficult time and, for my small part, I will continue to promote those ideals.”

Resolution chair Nigel Shepherd said: “Barry Bunyan is someone who, when we first had the idea for the Award, is exactly the sort of person we had in mind. He is someone who, through their daily work and in their local area, typifies the Code, embraces Resolution’s values, and continues the legacy that John Cornwell left.

“Barry received the highest ever number of nominations we’ve ever seen. In those nominations, we heard that he had spent the last 20 years mentoring and training young Solicitors, trainees, paralegals and support staff in the ‘Resolution Mindset’.

“Barry has continued to campaign against Legal Aid Agency funding cuts, providing evidence in legal action against the LAA to assist the most vulnerable. One nomination said that Barry ‘is a credit to family law. His commitment to his clients, fellow family law practitioners and the profession in general should be applauded.’

“As a high street practitioner, and by playing a leading role in their region, Barry has helped ensure that the voices of members working in a particularly challenging climate are heard.”

Barry deals with all aspects of family law, with a particular emphasis on divorce, financial issues and disputes in relation to children. He was one of the first collaborative solicitors in Lancashire and he has also carried the Help and Support for Separated Families (HSSF) Mark for many years, demonstrating his commitment to reducing conflict in family disputes and improving parental collaboration to focus on the needs of children.