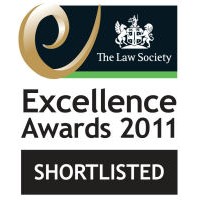 Farleys Solicitors has been announced in the shortlist for the 2011 Law Society Excellence Awards for the second year running. Daniel Draper, Commercial Litigation and Sports Law Solicitor, has been shortlisted for Junior Lawyer of the Year in the prestigious awards organised by the representative body for solicitors in England and Wales.

Daniel, who has been with Farleys for six years, has specialised in commercial disputes for a number of years and was named as Head of Sports Law last year. The award nomination comes just three months after the department moved to larger offices in Manchester city centre.

Now in their fifth year, the Law Society Excellence Awards were developed to celebrate the successes and outstanding achievements of firms and individuals in the legal profession.  This is the second consecutive year that Farleys has been shortlisted for an award at this prestigious event, and adds to the list of award nominations received over the past 12 months.

“Our Sports Law Department has enjoyed tremendous growth and success over the past year, which Daniel has played a highly instrumental role in achieving. We are delighted that his hard work has been recognised with this award nomination”.

The full list of shortlisted firm and individuals for the awards can be viewed here. The winners of the Law Society Excellence awards will be announced at a gala dinner in London on Tuesday 18 October.