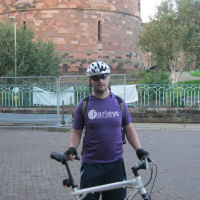 A solicitor at Farleys has raised over £800 for a children’s charity by participating in a fundraising cycle from Carlisle to Newcastle. Stuart Brown, a solicitor in the firm’s criminal law department, completed the challenge, which took in 84 miles of the Hadrian’s Wall cycle route, in just under eight and a half hours.

Stuart, who lives In Rossendale and is based at Farleys’ Richmond Terrace office in Blackburn, has undertaken several fundraising challenges in the past two years, including biking, hiking, running, abseiling and only earlier this year, took part in a charity skydive for Rossendale charity Vision.

Along with friend Jonathan Altham, Stuart has raised over £900 for the Ronald McDonald House, choosing the charity after they helped care for a friend’s family whose daughter was suffering from cancer.

“This was a really enjoyable challenge and despite encountering a number of problems along the way; including a snapped chain which I had to go and have repaired part-way along the route; I was determined to complete the course to help raise funds for such a worthwhile cause.”

Ronald MacDonald House Charities is an independent charity which aims to provide free home away from home accommodation at hospitals across the UK enabling families to stay close to their child and maintain a degree of normal family life.