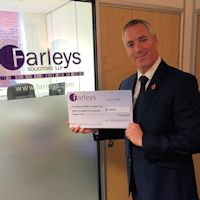 Farleys has been announced as the first business to join Accrington Stanley’s Redvolution after making a donation to the sum of £3,500 to the club.

Having represented local businessman Andy Holt and his company What More Ltd in the purchase of shares in the famous East Lancashire club, this is the next step in showing our support.

The league two club are aiming for promotion after the strongest start to a season in over 60 years. With the club’s £1.2m debt and a further £600,000 invested by Holt and his company, a ‘new era’ is being hailed for Stanley.

Ian Liddle, partner and Head of Commercial at Farleys said:

“Accrington Stanley are a fine club with a proud history steeped in the local community.

“Unlike some of the club’s bigger neighbours they haven’t had the luxury of relying on large sums of money being dropped into the club to help it make ‘ends meet’ – this means that it has had to rely on local people and businesses for its financial survival.

“Accrington Stanley has retained its ‘football soul’ and its connection with its fans who don’t turn up for prawn sandwiches, just a love of the club.

“They are a true community-based club and Farleys Solicitors are proud to support them as a small way of showing our thanks to a community who have been kind enough to support our business over many years.

“Andy Holt is a man I know well on a professional and personal level. Stanley fans can take great comfort in the knowledge that in Andy they have a man at the helm who is a shrewd businessman but above all a man of great integrity – a rare combination. These are genuinely exciting times for the football club and we’re delighted to support this new chapter in the club’s rich history.”

Accrington Stanley’s new majority shareholder Andy Holt said: “I have started it off and now we need to generate more cash so we are looking for sponsors to come on board and help the club even further. Farleys have been extremely supportive and they understand what we are doing at the club, putting a solid infrastructure in place.”