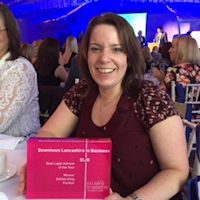 The Head of Corporate Law at Farleys has been named Legal Adviser of the Year at a prestigious awards ceremony. Debbie King, who works out of Farleys’ dedicated commercial law office in Blackburn, was presented with the accolade at this year’s Downtown Women in Business Awards.

Presented at a ceremony at The Villa, Wrea Green, the awards event was attended by over 150 leading businesswomen from across the county.

Speaking after the awards, Debbie said:

“I was pleased to be shortlisted for this award and thrilled to have won it.

“I would like to thank all the clients and professionals who voted for me to win and who also took the trouble to email me, saying very kind things. I really do appreciate it.

“I would also like to take this opportunity to thank my team, who are a great source of support and who I could not manage without. It has been a great year for myself and the team; having been instructed on a number of sizable and complex deals.”

Debbie, who originally joined Farleys as a trainee solicitor in 1997, successfully launched Farleys’ Corporate Law section of the Commercial Department in 2003 before being promoted to full equity Partner status in 2006.

Specialising in business and company takeovers and sales, investments, restructures, joint ventures and mergers, the corporate department at Farleys is now one of the most respected in the Lancashire region. With a client base including large regional as well as international clients across a wide variety of sectors, Debbie has recently completed deals for DMACK tyres, Sharrocks Fresh Produce Ltd and SBT Engineering Ltd. Debbie and her team also advised Andy Holt and What More UK on their recent takeover of Accrington Stanley Football Club.