Concerns at Police manipulation of Press

I spent a good part of yesterday giving interviews to the media on behalf of my clients, the family of Anthony Grainger. Anthony was shot and killed by a serving Officer of GMP whilst sat in his car unarmed.

Yesterday’s headline in the Manchester Evening News screamed out that criminal gangs had placed a £50,000 bounty on the head of a GMP Officer. A picture of Anthony appeared with the story and the clear implication was that friends or family of Anthony were associated with dangerous Salford gangs who had offered £50,000 to anybody who would kill a GMP Officer.

The family were staggered by the headline having never been contacted previously by the Police.

When I finally managed to discover the origin of the headline it appears to be attributable only to a 2 year old rumour was generated and recorded by GMP that there was a possible threat to an Officer. There was nothing to link to this Anthony or his family and nothing has been revealed to show the source of that rumour.

Despite this, the MEN article discredits both Anthony and his family. How can a paper run such a sensational headline based on ‘news’ that is over 2 years old?

We regularly see the willingness of the Police to manipulate the Press. In the Grainger case a Senior Officer leaked the IPCC Report to the same paper, Manchester Evening News, despite the fact that the family had not even been made aware of the contents. When the last major report was released on the Rochdale sex abuse scandal and was potentially going to be critical of the Police they arrested a gang of paedophiles approximately 10 days before the report was due to be published but only summoned the Press to be told about the arrests on the day before the report was to be published.

Is it therefore any coincidence that the MEN run this damaging headline only days before Peter Fahy is due back in Court to face criminal charges arising from Anthony’s death? 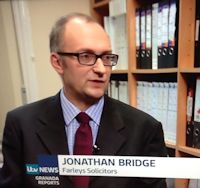 For further information contact Farleys Solicitors on 0845 050 1958 or alternatively you can email us.