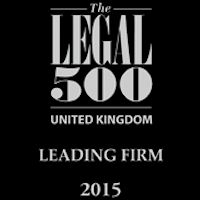 Congratulations are in order for a number of departments across the firm following the release of the latest Legal 500 rankings. Widely regarded as offering the definitive judgement on the capabilities of a law firm, The Legal 500 directory is a benchmark for firms in the legal sector.

Achieving places in the guide’s rankings in both private and commercial areas of practice, this year marks not only an improvement in previous ranked positions, but also a number of new listings for the firm. In terms of the former, the firm’s criminal law team are celebrating after moving into the top tier. Unrivalled in their skill and prowess, having been awarded ‘Crime Team of the Year’ at the recent Manchester Legal Awards, the criminal law department have demonstrated an unfaltering commitment to provision of outstanding legal services. The firm was applauded for their ‘first-rate criminal expertise’ with notable excellence in numerous high profile cases including drugs and supply conspiracies. As well as being name leaders in the region for general crime, the department also earned top rankings for their work in fraud.

Partner and Head Fraud & Business Crime Paul Schofield was named as a leading individual and described as ‘absolutely first class’ in his approach with a ‘very good grasp of client care.’ Partner Jonathan Taylor and Associate Partner Sian Hall were also recommended for their excellence and technical skill.

Once again the family law department were placed amongst the leading firms in the North West, noted for their work in highly emotive areas such as divorce, child law, and domestic abuse. A driving force behind the department’s success with over 12 years leading the team, Antonia Love was praised for her ‘commanding knowledge of the law’, and was noted as a formidable solicitor in high value divorce cases.

The firm’s personal injury department also placed in the rankings for the second time, reaffirming their position as regional leaders within this extremely competitive area of law.

The publication of the Legal 500 also saw the firm’s niche Sports Law department recognised. Commercial Litigation was also identified as a leading area, with Kieran O’Connor gaining a special recommendation.

Farleys Solicitors LLP is recognised as one of the leading law firms in the North West. As accredited specialists in all aspects of private and commercial law the practice offers the highest quality legal advice from down to earth advisors. For further information call 0845 050 1958. Alternatively please complete an online enquiry form.