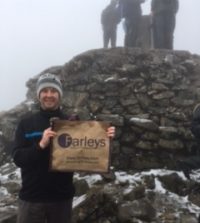 Earlier this month our very own Ben Leech took on the National Three Peaks Challenge in aid of Charity!

Ben is a Crime Solicitor here at Farleys and along with a group of 12 friends climbed Mount Snowdon, Ben Nevis and Scafell Pike in less than 24 hours. In total Ben and his friends have raised in excess of £4000 for a number of charities including Cystic Fibrosis Trust and the Manchester Heart Hospital.

Ben said: “Back in March four of us were watching a game of football on a Saturday afternoon and mentioned the possibility of doing the National 3 Peaks Challenge as this years charity event…48 hours later the date was booked and sponsor forms printed. With a group of 12 and 5 additional support crew/driver’s we completed the challenge in a respectable 22 hours and 12 minutes.”

Ben made the decision to fundraise when his childhood friend was diagnosed with Cystic Fibrosis and died of the disease at age 20. One of Ben’s other childhood friends had a niece who was also born with CF and died in 2014, aged 14. This strengthened his resolve to do more to help these charities.

In 2015, Ben’s brother-in-law had a serious heart attack and was treated impeccably at Manchester Royal Infirmary Heart Unit.  It became apparent, that like many other specialist units, they were under funded, and also had a charitable organisation status. Ben wanted to give something back to this organisation as a thank you from his family and friends, his brother-in-law is also father to the firms Litigation Executive, Sophie Hancock. The firm collectively sponsored almost £200 towards Ben’s challenge.

Since 2007 Ben and his friends have partaken in numerous events and supported various charities along the way. The group are extremely thankful for all the support they have received over the years and I think it’s safe to say we’re all excited to see what’s next.