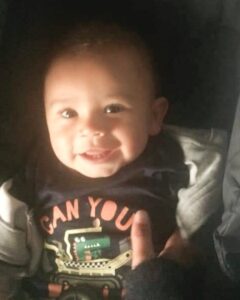 Coroner finds many failings and missed opportunities in the care of baby Zakari’s father who threw him in the River Irwell whilst experiencing a relapse in his psychosis.

The inquest into the death of baby Zakari Bennett-Eko (pictured left) reached its conclusion on Friday 11 March 2022 at Rochdale Coroners Court.

Heard in front of HM Senior Coroner for Manchester, Joanne Kearsley, evidence was considered over the course of three weeks from a number of witnesses in order to establish the circumstances surrounding this tragic death.

Zakari, aged 11 months, died when his father, Zak Bennett-Eko, threw him into the River Irwell in Radcliffe on 11 September 2019.  He was in the water for 45 minutes and tragically passed away at Royal Bolton Hospital.

Zak Bennett-Eko had a history of mental illness, including suffering from non-organic psychosis, and believed that his child was turning into the devil before he threw him to his death.

He was charged a year later, pleading guilty to manslaughter by reason of diminished responsibility and sentenced to a hospital order.  A serious case review was also conducted into Zakari’s death, which highlighted a number of multi-agency failings.

At the time of the incident, Zak Bennett-Eko was known to a number of different agencies and had a history of mental illness. The inquest focused on the care provided to him, in particular, the decision to discharge him from an earlier community treatment order in 2016 and decisions to discharge him from other services in the community prior to baby Zakari’s death.

Having heard all of the evidence in this case, HM Coroner found that there were many failings and missed opportunities in the care of Baby Zakari. She concluded that it must be remembered that in terms of causing Baby Zakari’s death there is ultimately one person who caused his death.

Having considered the matter with great care she went on to add that there is one factor which she finds can be said to have contributed to the death in that she is satisfied that on the balance of probabilities there was a missed opportunity to ensure Zakari’s father had appropriate ongoing secondary mental health input from January 2018 until September 2019.

“That is, the failure to have in place an integrated Community Learning Disability Service which provided Psychiatric and mental health support/coordination. On balance, I find this was a missed opportunity which could have assisted in the prevention of relapse as there should have been an earlier intervention when he was not prescribed with his medication and when he was seeking help in May 2019 and latterly.

In addition other professionals including GPs, social workers, the MHLT and family members would have had a contact into a service who knew him when he was asking for help in May 2019 and then from August 2019 – 11th September.

This missed opportunity to prevent relapse in my opinion possibly contributed to his actions on the 11th September 2019.”

There should have been more monitoring in place and a care coordinator in place which I believe would have helped avoid the deterioration in Zak’s mental health that led to the death of my son.

This is an extremely distressing case that no mother should ever have to experience. The inquest into the death of Baby Zakari highlighted a number of multi-agency failings in the care of his father who was experiencing a serious relapse of his psychosis at the time of the horrific events that led to his death. These missed opportunities may have avoided the serious deterioration in the father’s mental health that led to the unlawful killing of Baby Zakari.

Baby Zakari’s mother was represented by Kelly Darlington and her team at Farleys Solicitors LLP and Anna Morris of Counsel at Garden Court North Chambers.